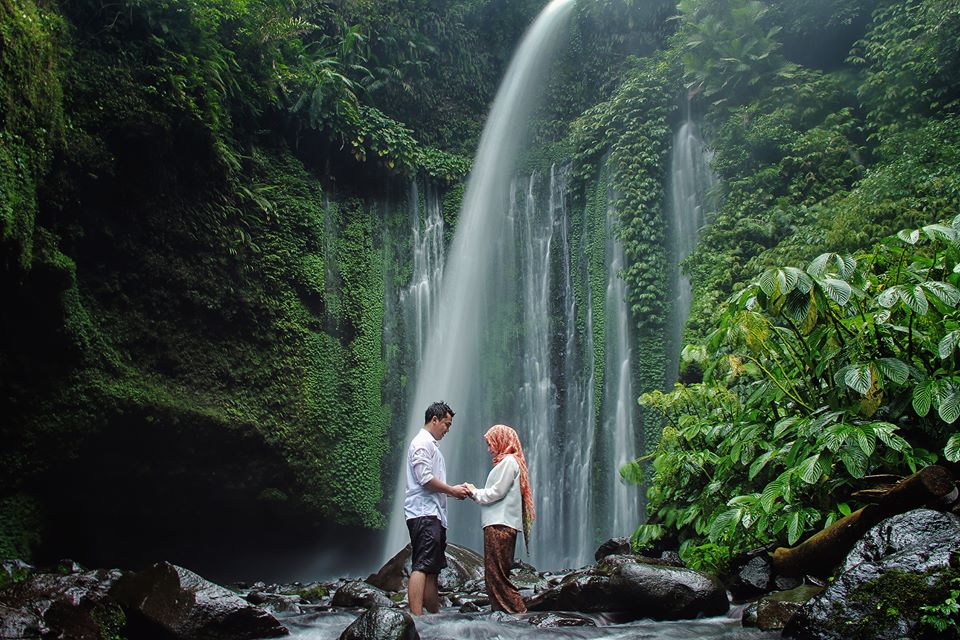 Senaru Waterfall Describe : Sendang gila waterfall is located on 600 m, above sea level and it has more or less 35 m length, this waterfall has owning two different level , where the first level emerge from the big hole of high bank then fall to the small pool it around 15 m length . And the second level jus flow of the first level waterfall it has 25 m length, this river base relative level off, that’s way many people has taken bath under the waterfall, this waterfall located in Rinjani national Park.

History : The name of this waterfall taking from local resident story that by not intentionally found this waterfall while hunting a mad lion which intrude in a countryside and then run way in to the jungle. And which the other interest is all resident has believed that this waterfall has magic which can make someone a year younger than actual age and can curing various diseases . And also this waterfall no so far from the others waterfall as like Tiu Kelep Waterfall and Batara Lenjang Waterfall.

TIU KELEP WATERFALL ( second waterfall )
Describe : Tiu Kelep waterfall is one of tourism object in Lombok and it very famous, as it has wonderfb view different with else waterfall in Indonesia, its water douched that direct to based land and make a big pool around waterfall, its water flow by 40 m length, but if you want take swim there you have to carefb, don’t try to take shower under the big one.
History : According local society the name of Tiu Kelep take from Sasak language that mean pool fly, And most of dwellers has believed that this waterfall has magic which can make someone a year younger than actual age and it can curing various diseases.

Acessibility : Distanced more or less 60 km from the downtown of Mataram. For to reach Senaru village just need it 2 to 3 hours by a car from the downtown. There are two roads for to go there is from Pusuk and from Senggigi beach, nothing the public transport direct to that location that’s way all of visitor ordinary has rented a car or motorbike. And from entrance door of the waterfall , all of visitor will go down with 315 doorstep, and need 20 minutes until the location of the waterfall from.

Itinerary :
First day on senaru waterfall Tour : we’ll puck you up et your hotel or your home stay by your guide then escort you to Senaru village for going to Sendang Gila and Tiu Kelep Waterfall, and after going through long way from your hotel you can take rest or take drink for an hour at Emy’s cafe restaurant in Senaru village and a guide will explaining about the waterfall while drink tea or coffee and after you got information about it, at 2 pm, the best time leaving go to the waterfall and from Emy’s cafe restaurant ( it close with waterfall ) to the firs waterfall its around 25 minutes with 315 doorstep go down, long way through wit rain forest et the first waterfall you can enjoying 30 minutes long and then you can take shower and take massage for your body by fresh water, than from the first waterfall ( Senadang Gila ) to the second waterfall ( Tiu Kelep ) only 30 minutes, on the way to ward to the second waterfall you will crossing a big bridge and you will crossing stream river just 3 minutes, if you lucky you will fine black monkey and many butterfly, et the second waterfall you can enjoying the view 2 hours , and take swimming by fresh water, and after you feel satisfied with the view we can leave the location for come back to Emy’s cafe restaurant and then , escorting you to your hotel, finish service.

Excluding :
• Camera
• A fair of Shoes
• Small bag
• Donation
• Tips for a guide

For further information and For special rates you can contact us by via eMail : basrinjani02@gmail.com or call phone +6281703525698