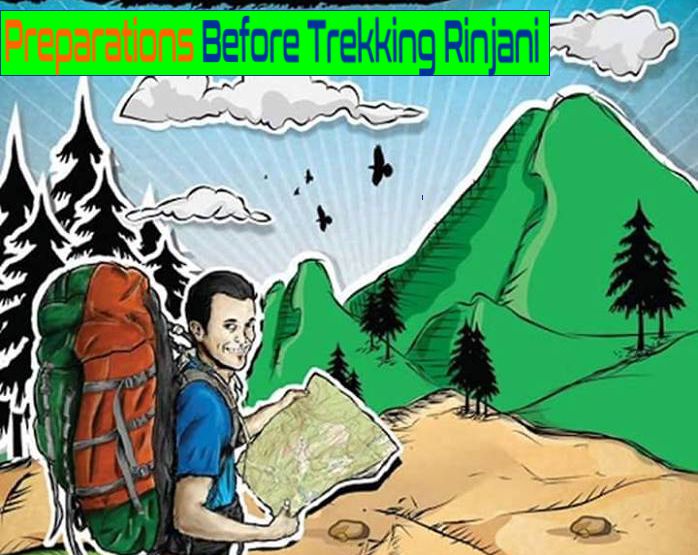 Rinjani Trekking Tips before climb up to Mount Rinjani Lombok Indonesia. Mount Rinjani on Lombok, West Nusa Tenggara, has an altitude of 3,726 meters above sea level is the second highest volcano in Indonesia, which is still included in the Mount Rinjani National Park which has an area of approximately 41 333 hecto Are. Mount Rinjani has its own spiritual value for Hindus in Bali and Sasak (Lombok native tribes), according to the Hindus of Bali itself Gunung Rinjani is a sacred mountain believed to be the abode of the gods besides Mount Agung and Semeru.

Every year, visitors who want to hike in the mountain is always increasing, the month of July to August is the month in which there will be many climbers who want to the summit of Rinjani, in August, exactly 17 August will be a lot of climbers are dominated by students who wanted to celebrate the anniversary of Indonesia in top of the mountain.

In addition to a very beautiful panorama, Mount Rinjani is also a wide variety of flora and fauna, but behind the beauty it has, this mountain has been many casualties, perhaps because hikers who do not prepare well, physically weak, or for other reasons, so before hike we must prepare ourselves and with the best equipment possible.

Temperatures around average around 20 ° C and lows of up to 10 ° C so prepare warm clothes before climbing to minimize the risk that could happen. In addition to the summit, there are other charms are usually visited by climbers, the lake Segara Anak which is located at an altitude of approximately 2000 meters above sea level.

Trails climbing Mount Rinjani there are three, namely through Sembalun Lawang village, Torean and Senaru, to reach the lake Segara Anak from our Sembalun takes about 8-10 hours if we go up from Senaru takes about 7-10 hours to get to the child immediately.

Segara Anak Lake has an area of approximately 1,100 hectares of the crescent-shaped with a depth of approximately 230 meters, usually the climbers pick up from Sembalun then down through Senaru.

1. When is The Right Time To Climb Mount Rinjani?

Pick the right time, such as in March – August, and avoid climbing during the high season is around mid-August, long holidays and the new year, because then you will not be satisfied with the trip very crowded. April to December is the best time and weather to get trekking rinjani

if forced to climb during the high season, as much as possible book a guide in advance, can sebualn earlier or a week in advance so as not to run out porter / guide for climbing Mount Rinjani is quite dangerous, we should not use a guide service if it has been hiked to Mount Rinjani and have memorized terrain that must be traversed.

2. Climbing Mount Rinjani What Should Be Using Porter?

are advised to use the services of the porter / guide for Mount Rinjani have a route that included “advanced” because it takes about four days and the track enough to make us tired, especially when the summit attack, so there are keeping our goods below.

3. What If Not getting Porter?

if we do not get a porter / guide we have to do is teamwork when climbing, or when we cross paths with another group we also can follow them from straying.

summit attack when we can also talk with other teams to conduct negotiations in order to porter they also want to keep our luggage, but we must be careful not to choose the wrong porter, before you can ask the identity and photograph the porter.

4. How Long Do You Need To Climb Mount Rinjani?

Mount Rinjani hike takes at least 4-5 days, so the previous first prepare your stamina, could be a week before climbing exercising so the body does not drop on the way to the summit.

5. Goods How Should Bring?

certainly you should carry equipment such as climbing, gaiter, treking pole, sweaters, raincoats and more.

for beginners who are confused should bring what, see the list below:

In the immediate children are hot tubs, silahakan soak in the tub to make our body muscles become relaxed and fit to continue the climb.

usually climbers ascend through Sembalun, we will go through the savanna Sembalun that look beautiful but will feel the heat once when the sun shone.

Senaru different from the path, if we passed the line, going through the forest, although the track is quite gentle but would seem to have no end, usually climbers would give up here because it was not up to.

For those of you who want to buy can buy supplies when it reached Sembalun, because there has been no complete logistic store.

This is Route For Rinjani Trekking/ Climbing

Sembalun is the path of the most popular among climbers of Mount Rinjani because it has a beautiful view. Along the way we will be presented with a view of savanna and winding ridge to gorge on either side. However, when you begin entering the paddock savananya air will feel quite hot, this is what often makes mental climber down.

This is the second line of the most favorite for hikers, in addition to be used as a climbing lane, lane Senaru also often used by people around to perform the ritual religious customs at the peak of Rinjani or in Lake Segara Anak, to get to Lake Segara Anak you takes about 12 hours. Then from Segara Anak Lake to the summit of Rinjani takes approximately 9 hours to pass Pelawangan Sembalun.

Torean lane is not very popular, and a third option. The route through the village Torean is heading times Tiu. This is a post I climb Mount Rinjani. Treking passed a slope of 20-45 degrees. The view is quite popular is the White sungau flow.

Timba Nuh  is located in the village of Pengadangan. Pringgasela Distric – East Lombok, this pathway is also famous as the South Line, dibawha a little info on the path of  Timba Nuh: Locations springs:

How to Go to the hamlet Timbanuh:

Where Should Camping / Overnight ?

Remember, do not make the trip as the night, if we do not achieve better Sembalun Plawangan set up a tent in Postal 2 as it travels toward Plawangan Sembalun of Pos 3 very tiring.

Postal 2 is a pretty nice place to see the sunrise, set out early in the morning of the post 2 because the journey is still far.

After arriving in Plawangan Sembalun simply looking for a place nge-camp near the springs.

Is There a water spring at Mount Rinjani?

To avoid queues while fetching water are advised to take at night.

Rest in advance so that the body is not too tired, after stamina back fit please do trekking to the summit.

Bring about 1 liter of water to avoid dehydration and bring energy foods.

Where Spot Good To Take a picture of Mount Rinjani?

Plawangan Sembalun (see immediately the child and the summit of Rinjani)

Is There a Signal?

nah, this unique, in the sea of children we could use the phone to communicate, be it SMS or telephone on condition should use the operator XL, because here there is only a signal XL.

NOT RECOMMENDED down to the lake without any equipment or appliance climbing down the cliff. So you must attention this Rinjani Trekking tips

Only in RECOMMEND to the South Peak 3,575 masl.

Use local guides who know very well the track Timba Noah because this track has characteristics that are very different tracks with Sembalun or Senaru.

And bring your trash back down.

How To Go To Mount Rinjani:

3) take the bus to the terminal Ubung Denpasar –

8) on the market Aikmel car ride to the pickup Sembalun.

from the airport to rent a car to get to Sembalun and or services memesasan Trekking Organizer as Bas Rinjani Summit.

So, I hope this Rinjani Trekking Tips is useful for every one want to plant a Trekking Rinjani on Summer season

For More informations, Contac us :